When it comes to football off-season, the AFL is not doing enough

The AFL draft has been completed for another year. Before I go any further with this piece, I would like to say that I like watching the draft, I pay ..

The AFL draft has been completed for another year.

Before I go any further with this piece, I would like to say that I like watching the draft, I pay attention to the players in their under 18 seasons, and ultimately, it’s a general feel-good type of night watching young men fulfill their childhood dreams alongside their families and friends.

However, the fact that the draft now goes over two nights just beggar’s belief, and even though it isn’t a huge issue, it’s just another media, money-grabbing exercise by the current leadership of the competition which isn’t doing itself any favours whatsoever.

We all know the reasoning of the draft being held over two nights was for more viewership/eyes on football, but I’d love to see the ratings to see if that is actually the case.

If you are a supporter of a team that has no top twenty picks but a glutton of picks in the early second round (see Geelong last night), why in the world would you watch the first night of the draft? What are you getting out of watching it? I and many others I have spoken to would rather watch a movie, and rightfully so.

Another reason was because of the introduction of live pick trading throughout the draft, which honestly, means nothing to the average person watching the draft. What has been the biggest pick swap that has happened on draft night that has influenced the future of any team? I’ll answer that question for you… there hasn’t been one. 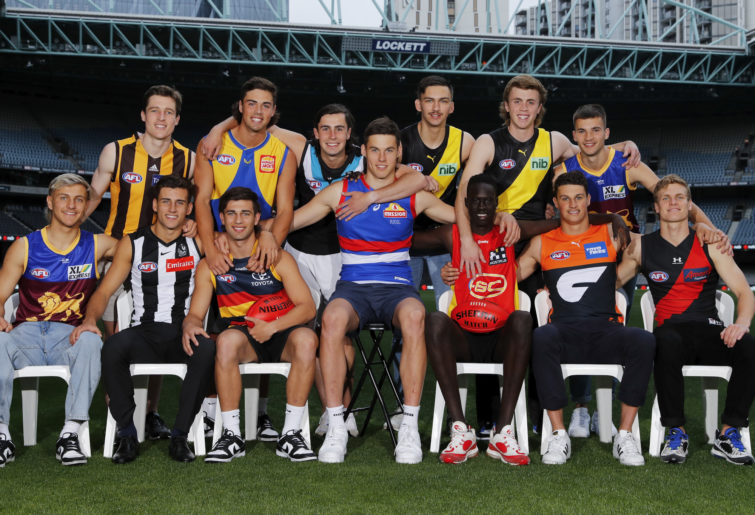 The Victorian first round picks from the 2021 AFL Draft. (Photo by Dylan Burns/AFL Photos via Getty Images)

It feels like the AFL have gone in half-hearted to the whole concept of draft night. They want it to be like American sports who have massive parties on draft night, and the media over there build it up to legitimately be one of the defining days on the sporting calendar, which make no mistake, it is.

The draft changes clubs fortunes. A few bad ones when you are already finishing near the bottom and you set yourself up for a decade of nothingness, a few good ones and you have eras like the Hawks, Cats, and Tigers have had in recent years.

The AFL as a whole though, don’t advertise the draft nearly enough if the plan is to see it reach the levels of importance it holds to the average NFL or NBA fan.

How many articles does the Herald Sun or The Age contribute to these under 18s players between March and August? You can count them on one hand. It’s all good for them to have a few journalists talking about it on their own AFL website throughout the year, but nobody checks that anyway because the functionality of the site is an absolute abomination.

How many games do we see of the NAB League? Maybe an occasional final/grand final deep into the season. We don’t even get to see all of the Under 18 Championship games.

The question is, do the AFL want to front up the money and make us, the public, be able to see these players in their under 18 season and therefore grow to love their games/personalities/even clubs… or are they going to sit around implementing the same tactics they are now?

It just seems eerily like the way they have treated the AFLW competition in many aspects.

Another no-brainer, at least from my perspective (let me know if you think I’m wrong) is that player trading should also happen on draft night, especially if they want to keep this nonsense logic of having it over two days.

The AFL always wants eyes on the competition over the summer, and what better way to do that than to keep the rumours/speculation of trades happening all the way up to draft night after the finalisation of the trade period.

I love trade week personally, even though we just had a shocking one this off-season, and it would make the draft much more exciting and increase viewership (then every club’s supporters watch it).

Think about the draft just gone and the speculation and excitement that would come from Hawthorn. They held picks 7, 23, and 36 and it was obvious over the trade period that they wanted more and were prepared to give away top senior players for the right deal.

Ben Hobbs was the slider in the draft, going at pick thirteen to Essendon. He fitted a need for Hawthorn (Ward and Hobbs would have been seen as the midfield nucleus for the next flag tilt) and there’s nothing to suggest something could have been done with a player like Tom Mitchell or a Chad Wingard.

That is just one of many examples. Clubs like Geelong could have wanted to trade into the top ten, clubs like Richmond could have traded up with deals involving players, etc.

The AFL need to decide what they’re going to do with the draft (and even the trade period to a lesser extent) because while they have the chance to dominate the sporting landscape, basically, until December, they’re missing a trick by having things set up the way they are currently.

Read More
Did you miss our previous article...
https://brands.delivery/sports/furys-xrated-shot-at-jake-pauls-girlfriend
payattentionhasbeen