After reaching the semi-finals for two seasons in a row, the Renegades finished WBBL06 in seventh. The Renegades have lost two White Ferns, who have..

After reaching the semi-finals for two seasons in a row, the Renegades finished WBBL06 in seventh.

The Renegades have lost two White Ferns, who have been stalwarts of the club: Amy Satterthwaite (899 runs and 15 wickets) and Lea Tahuhu (53 wickets).

The Renegades have lost three of their top four wicket takers in history for WBBL07, including Tahuhu.

Molly Strano is the leading wicket taker in WBBL history with 104 wickets – she is joining the Hobart Hurricanes. Amazingly, Strano has played in all 85 of the Renegades’ matches. Even crazier is that as the Renegades play the Hurricanes in their first match, Strano is likely to play in the first 86 Renegades matches, but in the 86th match will be wearing purple instead of red.

The Renegades’ fourth leading wicket taker Maitlan Brown (44 wickets) is joining the Sydney Sixers. Brown has continued to improve and has been a very good performer for the Renegades.

The Renegades will have three new overseas players in WBBL07 as South African power-hitter Lizelle Lee will also not return. Lee was the Renegades’ leading run scorer for WBBL06 with 261 runs.

Erin Fazakerley and Courtney Neale round out the departures for the Renegades.

At just 23 years of age, Australian star Sophie Molineux will take over from Satterthwaite as Renegades captain. 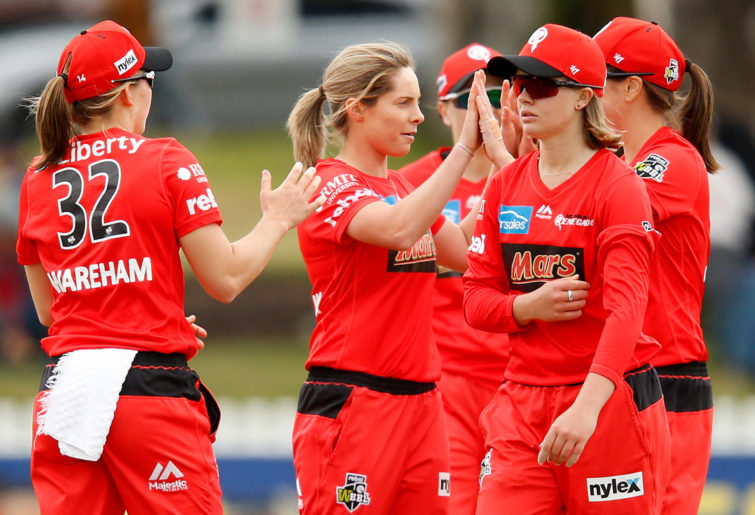 Two Indian stars will join the Renegades for the upcoming campaign.

Indian captain Harmanpreet Kaur has played over 200 international matches in all formats. She has scored close to 5000 runs for India and has over 60 wickets.

The other recruit from India, Jemimah Rodrigues, has scored over 1000 runs in 50 T20 matches for her nation.

Kaur and Rodrigues will help fill the gap left by the departures of Satterthwaite and Lee.

Someone else who will help fill this batting void is Jess Duffin. Duffin, who is returning to the Renegades after the birth of her first child, is the third leading run scorer for the Renegades with 1045 runs.

Another Australian spinner, Georgia Wareham, has taken 31 wickets and scored 305 runs for the club. At the age of 22, Wareham has played 35 T20s and 23 ODIs for Australia and recently made her Test debut against India on the Gold Coast.

The Renegades have signed 29-year-old English all-rounder Eve Jones. Jones has not represented England at international level. However, she scored over 800 runs in the most recent English domestic cricket season playing for Birmingham Phoenix and Central Sparks.

Carly Leeson was a significant contributor in WBBL06, where she was the Renegades’ equal leading wicket taker with 11 wickets.

Courtney Webb was the second leading run scorer for the Renegades in WBBL06 with 246 runs.

Wicketkeeper Josie Dooley scored 138 runs in WBBL06. Dooley, Leeson and Webb will all again be important components for the Renegades in WBBL07.

Holly Ferling has been recruited from the Stars as almost a like-for-like replacement for Maitlan Brown. Ferling has played 64 matches for the Brisbane Heat and Melbourne Stars and taken 43 wickets.

Makinley Blows also returns. Blows has played a total of 28 games for the Stars and the Renegades but has only scored 35 runs in seven innings and taken eight wickets.

Eighteen-year-old right-arm off-spinner Ella Hayward made her debut for the Renegades in WBBL06. Hayward played eight matches, taking five wickets, including 4/16 against the Melbourne Stars. Hayward batted once and made 12 not out.

Fast bowler Ellie Falconer has signed a three-year deal with the Renegades. The 22-year-old has spent four seasons with the Adelaide Strikers, but is yet to make her WBBL debut.

Rhiann O’Donnell returns to the WBBL after spending WBBL03 with the Renegades and WBBL04 with the Hurricanes. O’Donnell scored 488 runs and claimed 25 wickets for Melbourne in 2020-21, winning the Una Paisley Medal.

The Renegades’ batting line-up appears to be quite strong and their recruiting has been able to cover for the losses of Satterthwaite and Lee. However, the worry I have for the them is with the loss of Molly Strano, Lea Tahuhu and Maitlan Brown that their bowling unit may struggle.