Kyrgios spits on the crowd in his all-time dummy spit

The Australian Open crowd has been Nick Kyrgios' biggest weapon over the last fortnight, but today he turned on them.The greatest enigma in tennis,..

The Australian Open crowd has been Nick Kyrgios' biggest weapon over the last fortnight, but today he turned on them.

The greatest enigma in tennis, Kyrgios has been at the centre of plenty of crowd controversy throughout the tournament, repeatedly revving them up and earning his own army of supporters who have followed him from match to match.

His on-court antics and the effect they have on the crowd certainly irked men's No.2 seed Daniil Medvedev as the latter knocked Kyrgios out of the singles draw. Medvedev complained then that fans were making too much noise during his serve, and being disrespectful.

Yesterday, Kiwi doubles player Michael Venus delivered a withering blast for Kyrgios, calling him immature and a "knob". Earlier in the week a rival doubles trainer tried to fight Kyrgios and his teammate Thanasi Kokkinakis after a heated match.

The pro-Kyrgios crowd has undoubtedly helped the divisive star get on top of opponents during this Open, but during today's doubles semi-final the shoe was, albeit briefly, on the other foot. 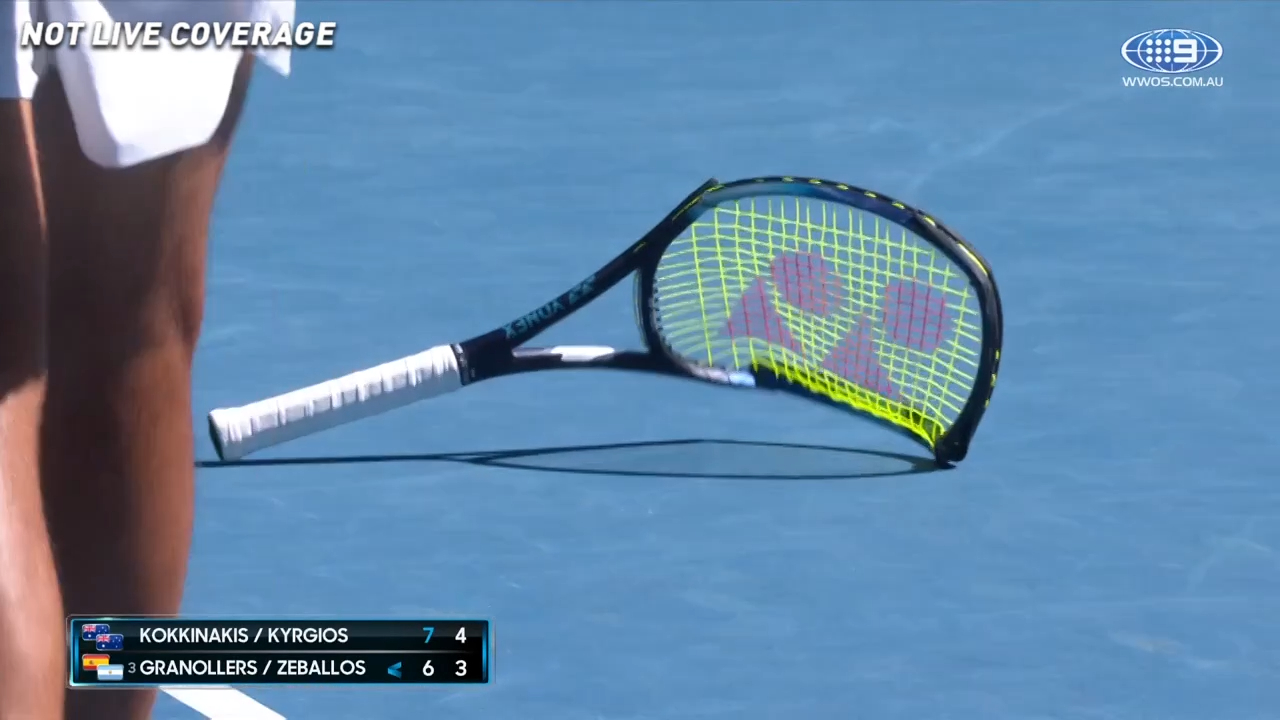 Kyrgios spectacularly spat his dummy during the second set of their straight-sets victory over Marcel Granollers and Horacio Zeballos.

It started when one of his serves was called a let. He yelled at the chair umpire that the ball was "this high" - gesturing with his hands wide apart - over the top of the net. When another serve got called a let soon after, he again yelled out in frustration.

Stream every match, every court of the Australian Open live and free on 9Now.

Then, Kyrgios accused the crowd of making noise during his serve.

During his meltdown he pegged a ball at the back fence, smashed a racquet on the ground, and flipped his middle finger to the spectators.

At the change of ends he continued his verbal abuse of the chair umpire. 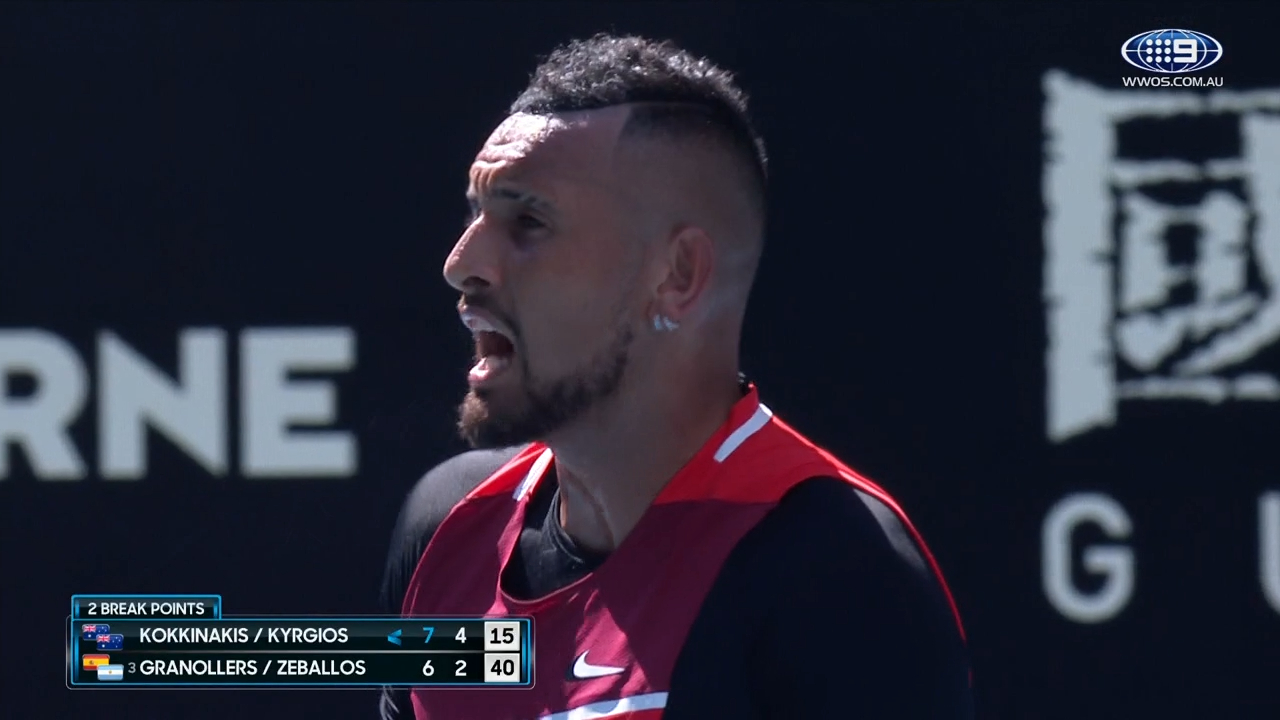 "When are you going to control the crowd mate?" he said to the umpire.

"How many times does it happen before the serve? You going to keep letting them scream before I throw up the ball?

The chair umpire told the crowd to be quiet during the service motion.

Luckily for Kyrgios, his doubles partner Kokkinakis remained composed and was able to guide the team to victory, as they reached the men's doubles final. 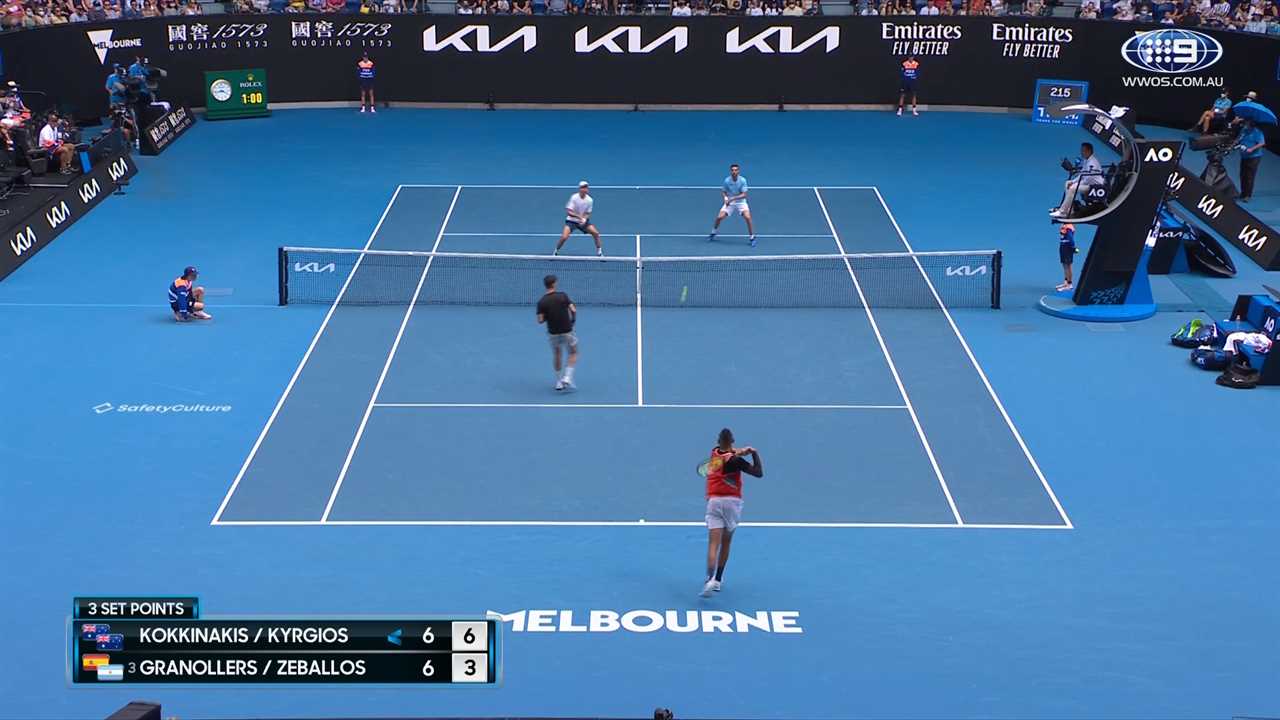 They take on fellow Aussie pairing Max Purcell and Matt Ebden in the decider.

"You know I have played a lot of singles matches around the globe with amazing atmospheres, but this week with Thanasi playing in front of you, nothing beats this. This is insane," Kyrgios said in the pair's on-court interview with Nine's Sam Groth immediately afterwards.