Hey Dinks, its January, so here is a personal update.  I’ve mostly been looking at new fintech apps, building side income and saving money..

Hey Dinks, its January, so here is a personal update.  I’ve mostly been looking at new fintech apps, building side income and saving money. 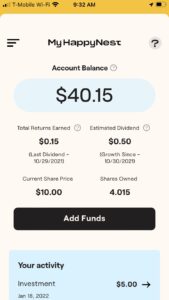 One thing I did in January was experimenting with some Fintech apps.  The latest one I’ve been working with is an outfit called HappyNest (not to be confused with the laundry company).  I’d heard about them a few months back when I was looking for ways to double my money.  I opened up an account using an old referral link and their customer service was cool about honoring the deal even though the terms had long expired.

HappyNest is a Private Real Estate Investment Trust (REIT). The company was founded by entrepreneurs Jesse Prince and Leonardo Sessa. So far it is still a fledgling operation. The company has only raised about $1.1 million and has just two substantial properties. A Fedex terminal in Indiana and 14% of a CVS in Massachusetts (per the SEC). So, they’re still looking for capital to scale up their business.

Their tech stack works pretty well.  In fact, their smart phone app has a feature that lets you round up your purchases on your credit/debit card and invest the difference in HappyNest shares.  Their shares also pay about 6%, which should keep pace with inflation.

So far I’ve got about $40 bucks into the service.  I’m targeting getting $100 into the service by December of this year.  I would go harder on HappyNest, but the lack of a broad real estate portfolio and relatively slow fundraising (roughly $550,000 for 2020 and 2021 each) makes it difficult to justify the risk of adding more capital – especially when you consider the hundreds of REITs available in current equity markets.

If you want to get into HappyNest, I’d wait for a sign up incentive and only commit a small amount of money.

I’ve scan all my receipts.  Since receipt scanning is trading data for money, most of the apps are slow payers, but I am seeing some fruit.  The issue is most of them aren’t paying much.  And, when they do, its often in Amazon giftcards instead of cash.

So I’ve managed to build up a bit of credit in Amazon.  This is good, but what I really want is stocks and bonds.  By and large you can’t buy those on Amazon.

I’ve asked around but nobody seems to know how to convert Amazon credit to marketable securities.

In term of extra income apps, what is working is Earn App.  I’d installed it a while back on a lark.  When I checked it last week, to my surprise I had like $11 bucks in the service.  Its been paying me for my used bandwidth by about $1 per gigabyte. Amazingly, it actually pays what it says.  This is far better than some of the other things I’d been experimenting with.  I’d give it a try => the sign up link is here.

In case you want a handy list of apps that will actually give you money, here it is:

I’d take a few hours and get all of them installed.

If you know of any other solid passive income players, I’d love to hear about it. 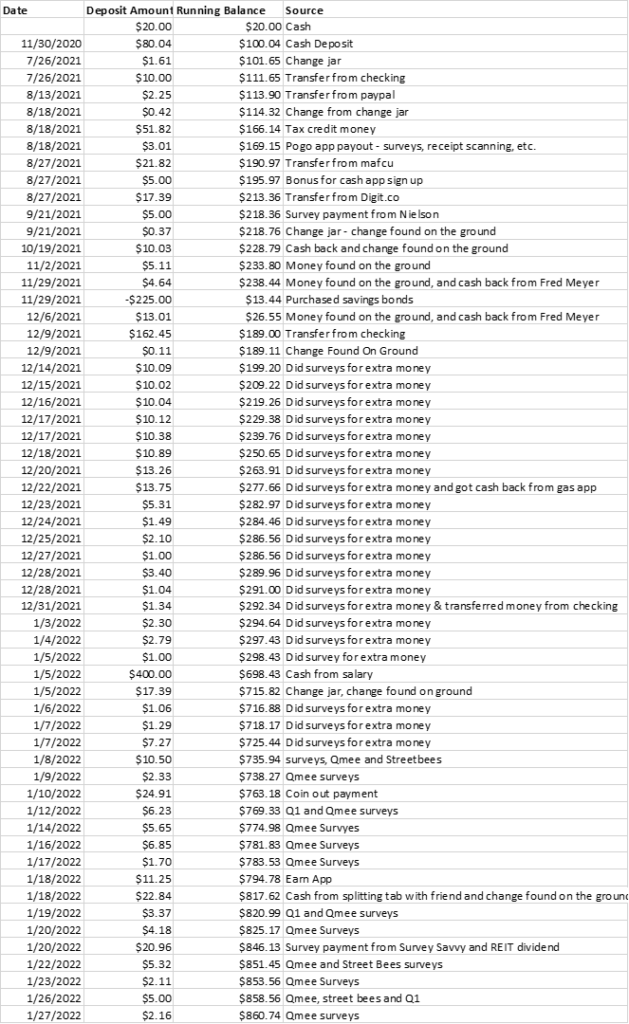 My scraped together emergency fund.

I’m frankly worried about inflation. Late last year, I read several econometric studies projecting 12 to 18 inflation rate numbers for selected commodities, so we could easily see more than 5% to 7% overall inflation in 2022.  At this point none of the options on the table for where to stash the emergency funds are good.  Certificates of Deposit and checking accounts are paying interest rates of something like 0.05% here in Oregon.  Other options like stock and crypto are too volatile, and are likely in a bear market. Even traditional alternatives like bonds have taken it on the chin.

At this point I’m going to try and find the highest yielding money market account possible and just stash the cash there – then pray that the Fed gets inflation under control soon.  This is a terrible plan, but it is the most workable one I can think of.

If you want more on building wealth, read these:

Savings And Side Income Ideas You Probably Haven’t Thought About

December Net Worth – Drooping Assets and Living Off The Land